Prelude: a passion for music 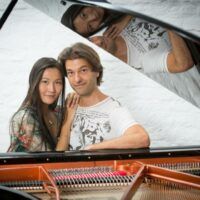 Bailin and Ernest Bittner have known each other since their schooldays, when they argued over the best piano practice room at the BRG Boerhaavegasse in Vienna. Later, Ernest studied composition and saxophone at the University of Music and Performing Arts, Bailin decided to study medicine at the University of Vienna. In 1997, they founded the “t-on” music rehearsal and recording center at the Vienna Naschmarkt together with friends. At that time, Ernest made some money from tuning pianos. He kept hearing about how unaffordable new instruments were for many families and how buyers’ inexperience in the used market was often exploited. Ernest an Bailin were unhappy with the situation in the city of music, so they decided to change something.

In 1998, Bailin and Ernest opened their first Klavier Galerie in Andreasgasse near Mariahilfer Straße. On 120 m² they sold carefully selected affordable used pianos. Their personal commitment and the exceptional price-performance ratio spoke up quickly. Soon, the shop became too small and a second location followed, then a third, until – by coincidence – they discovered the present-day location in the Kaiserstraße. Here, they found plenty of space to live their dream and create an oasis of music. Not only music lovers from Vienna come here on a regular basis, but also pianists from all over the world come here and enjoy the unique atmosphere.

And then came Feurich

After their honeymoon in 1999, Bailin and Ernest were finally hooked on the idea of bringing European know-how to China in order to create a perfect symbiosis of traditional hanicraft, specialized technical knowledge and modern production methods. With the recommendation of a Chinese friend, they became aware of a private piano parts manufacturer in Ningbo. That was the beginning of a long-lasting, successful cooperation. The high European quality standards and the high-tech precision machines in the Chinese production plant came to be the perfect symbiosis to develop and build high-quality pianos at an unbelievable price-performance ratio.

In 2010, they acquired the trademark rights of the traditional German company Feurich and moved the head office to Vienna – directly into the Klavier Galerie. There is probably no piano maker in the world who is closer to the customers and understands pianists’ needs better. The numerous rehearsal rooms at Klavier Galerie are our laboratory and we constantly strive to incorporate our findings into the development of our Feurich pianos.

Piano making is back home in Vienna 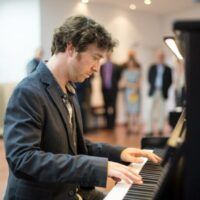 In recent years, Bailin and Ernest have constantly expanded the international Feurich team and spared no effort to implement intricate piano innovation. With the opening of the Vienna KLAVIERmanufaktur in 2016, a dream came true. On the one hand, because one of the most innovative upright pianos in the world is being built here and, on the other hand, because a revival of this historical tradition in the city of music is a personal matter for them.

“Our vision: We want to create pianos with useful innovations and bring pleasure to music lovers around the world with their own piano.” (Bailin & Ernest)

Cookie Consent Management
In order to provide you with an optimal experience, we use cookies to store and/or access device information. If you consent to this technology, we may process data such as browsing behaviour or unique IDs on this website. If you do not give or withdraw your consent, certain features and functions may be affected.
Manage options Manage services Manage vendors Read more about these purposes
View settings
{title} {title} {title}